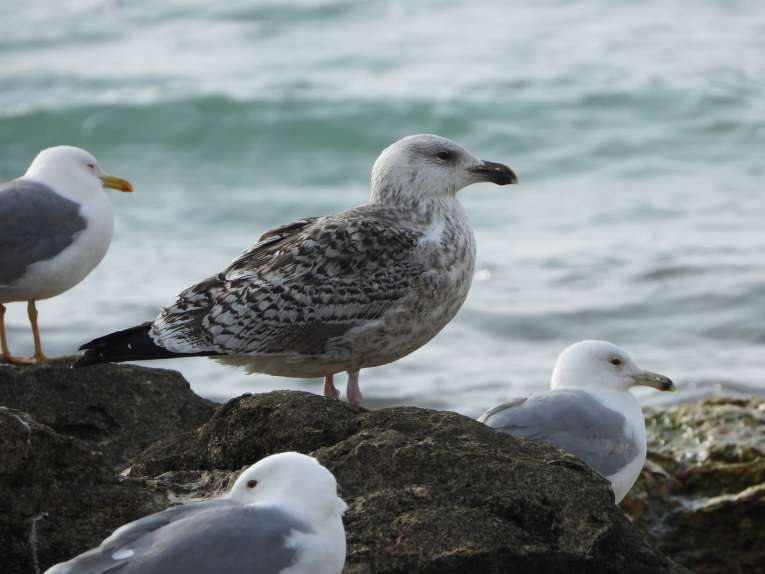 The first reliable record of the Great Black-backed Gull on the territory of Kazakhstan. There are indications of finds of this gull in the Caspian Sea between the mouths of the Volga and the Urals, as well as near Omsk (Dolgushin 1962). Vagrant are known to the Makhachkala region (Tatarinkova 1970). A new species for the fauna of Kazakhstan. The Passer simplex zarudnyi lives in the Karakum Desert and the southern part of the Kyzylkum Desert (Stepanyan 1990). This is the first find in the northern part of Kyzylkum! 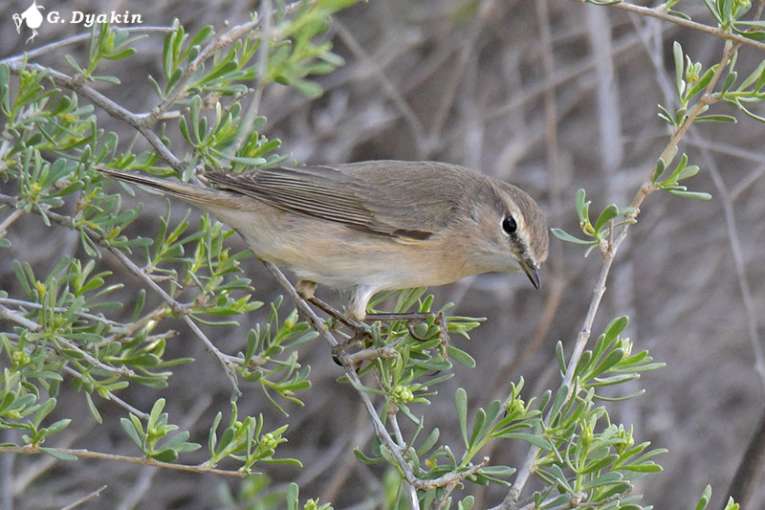 A new species for Kazakhstan. The habitat of Phylloscopus lorenzii covers Turkey, the Caucasus, Transcaucasia and northern Iran. 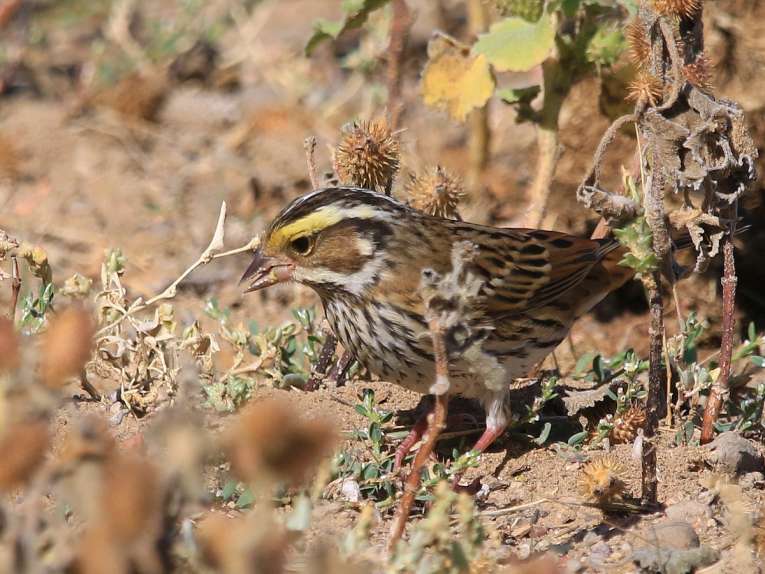 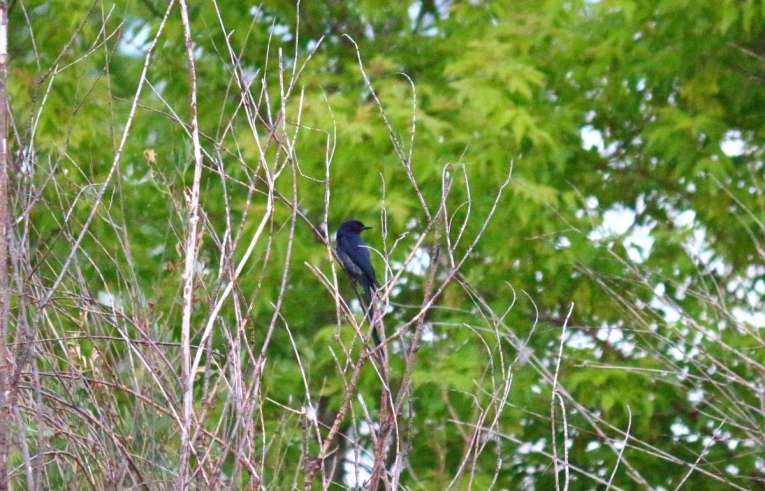 New species for Kazakhstan. The closest breeding spots are located in Turkmenistan, at a distance about 600 km (Stepanyan, 2003). Also recorded in areas near southern cliff of Ustyurt (Mischenko, Scherbak, 1980; Bukreev, 1997), 400 km in south of this record. In the western coast of Caspian Sea Pale Rock-Finch lives in NE Dagestan (400 km in west direction, behind the sea). It should also be noted that Sergei Bukreev (2000) found birds with territotial behavior in Baskunchak lake (48˚N) near Kazakhstan-Russia border; this record is much more north than Caucasus and Mangyshlak (43˚-44˚N), about 600 km to NW. 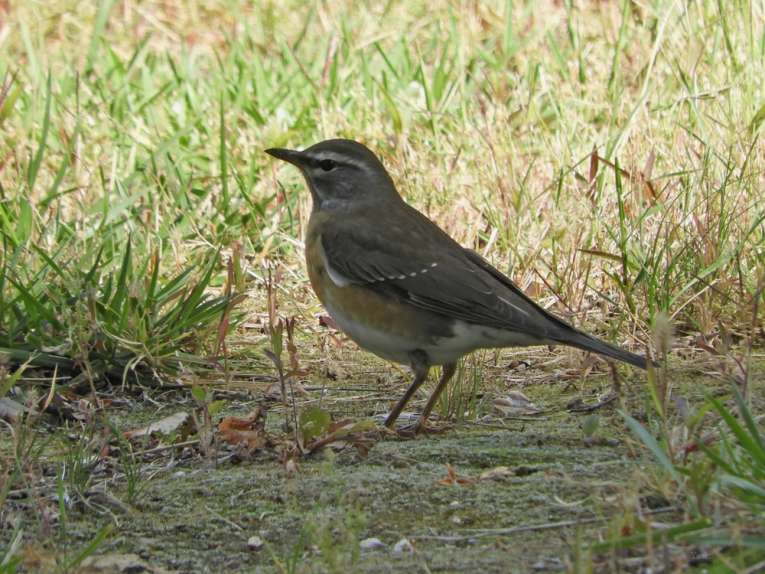 The new species of the fauna of Kazakhstan. Eyebrowed Thrush is distributed from the east of Western Siberia (approximately to the line of Tomsk) to the Pacific Ocean. Vagrants were recorded in Western Europe. The second record of this species in Kazakhstan. Two birds were observed on trees near the railway junction Taigyr in the Karakiyan district of Mangystau region. In the latest research of birds of Mangyshlak, Ustyurt and Peninsula Buzachi B.M. Gubin (2015) mentions the records of 31th August and 8th September 2010, when Patrick Palmen took the photos of the female bird in Fetisovo village.
The new record was at breeding season, so these two birds could be a sign to the breeding in the region (O. Belyalov, oral report). This record complements the present knowledge and indicates to the pronounced tendency of expansion the breeding range of species which was recorded in recent years in this areas where it wasn’t observed before (Koblik, Arkhipov, 2014). During the Soviet period only one record of this species was known, at April 15th, 1952 in Turkmenistan (Dementyev, 1954). Now vagrant birds were registered in Moldova, Ukraine, Armenia and Russia (Krasnodarsky Krai), but the potential breeding sites are expected for Turkmenistan (Koblik, Arkhipov, 2014). 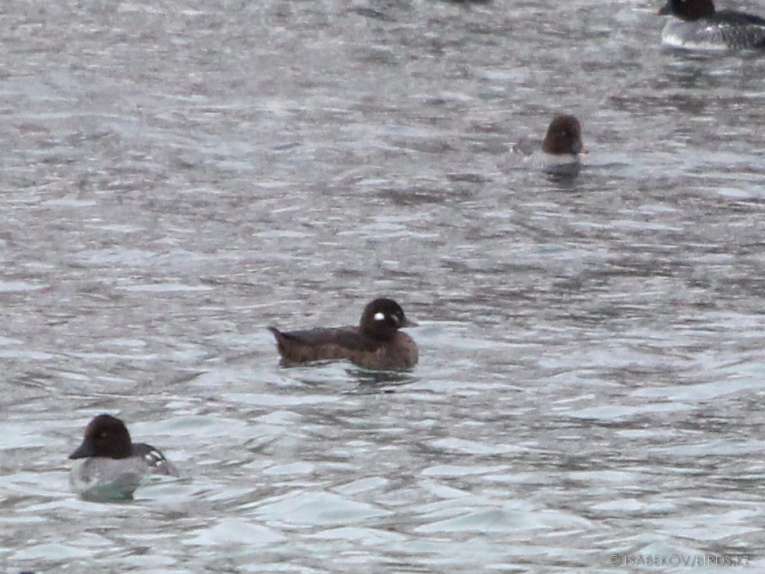 First reliable record of Harlequine Duck in Kazakhstan. There is only note of E.A.Eversmann (1866) about winter records in the lakes of southern steppes, but this record is too unclear. Near the borders of Kazakhstan recorded only at Nezhinka village near Orenburg where male duck was shot by N.A.Zarudny (1888). Both records related to the second half of XIX centure. 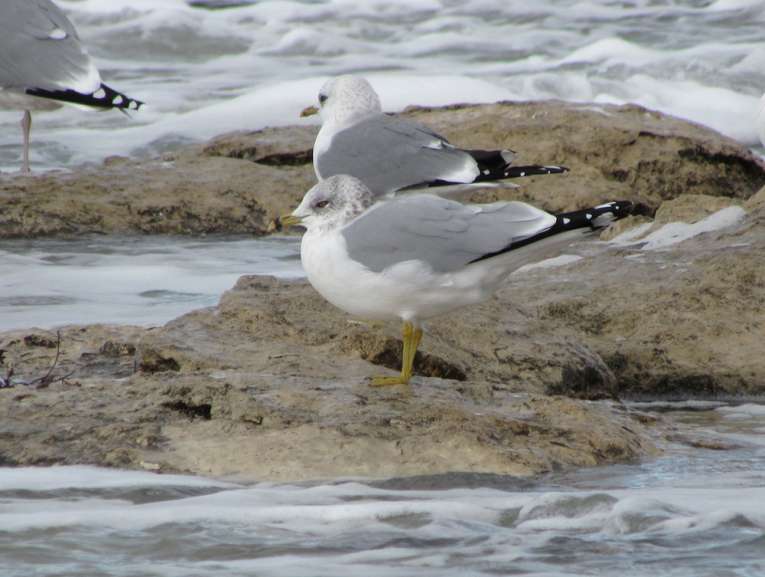 This is a new species for Kazakhstan and Central Asia. Ring-billed Gull inhabits in Northern America, but annually vagrant birds recorded in Western Europe and rarer observed in Central and Northern Europe. This is the first record of this bird in Caspian Sea coast. Probably the same bird was photographed in flock with Common Gulls (Larus canus) in the same place 7th of January and 5th of November 2015 (Yasko, www.birds.kz) but was identified only recently. The second record of the Mongolian Gull in Kazakhstan. Previously juvenile bird was photographed 25th of October in Ust-Kamenogorsk (A.Feldman, www.birds.kz). New species for Kazakhstan. Two adult birds were observed in the NE bay of Tengiz lake together with Greater Flamingo. 10 of September these birds were recorded by R.Urazaliev too. Afterwards, Ruslan Urazaliev watching the video shot by Alena Shmalenko (Koshkina) of June 14, 2009 in a large number of Greater Flamingos found a bird, whose size and coloring did not leave any doubts that it was a Lesser Flamingo. Thus, the record in 2009 became the first documented evidence. This is third record for all former USSR area. The first record of Lesser Flamingo was at 3rd of August 2007 in Limanskoe, Odesskaya oblast, Ukraine (Rednikov K.A.). The main breeding range of this species is located in eastern regions of Equatorial Africa in the salt lakes of Kenia and Tanzania. Also there are some colonies in the coast of Persian Gulf, and in Sambhar lake in Indian state Radjastan. The closest breeding spots are located at 3500 km to south from the record in Kazakhstan. It’s interesting that this species mostly feeds the Cyanobacteria and Diatom plants, unlike of breeding in Tengiz lake Greater Flamongo (Phoenicopterus roseus) which feeds mostly by Artemia salina.
Уразалиев Р.С. Малый фламинго Phoenicopterus minor Geoffroy Saint-Hilaire, 1798 - новый вид в фауне Казахстана // Орнитологический вестник Казахстана и Средней Азии. Вып. 4. Алматы: МОО - СОПК, 2017. С. 311. New species for Kazakhstan. Recorded bird is related to L.s.niloticus subspecies. Closest breeding spots are located in the south and west coast of Caspian Sea. Isolated populations found in Baku vicinity (40˚25΄N, Panov, 2008) and Dagestan (43˚00΄N, Bukreev, Dzhamirzoev), in the almost same latitude with Aktau (43˚40΄N). The closest record in the east coast of caspian Sea is record of couple in Turkmenistan, Kurendag mountains (Mischenko, Scherbak, 1980), about 400 to south from Aktau. This vagrant bird could indicate to the extending of breeding range, which probably present in the west coast of Caspian Sea. 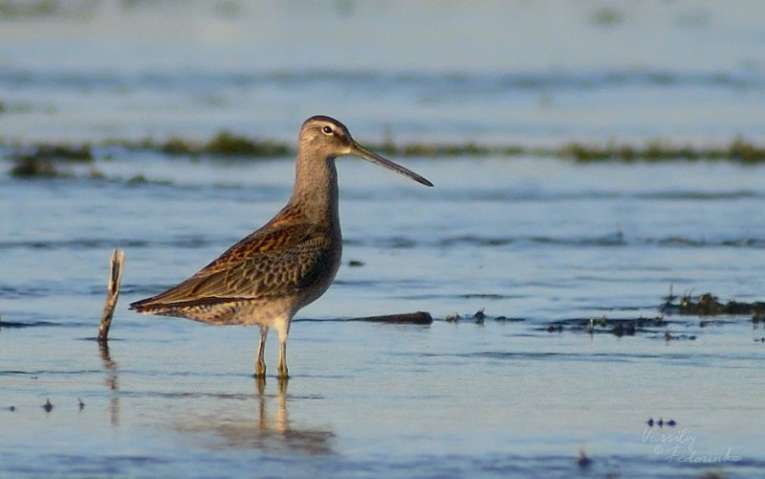 The first reliable record of Long-billed Dowitcher in Kazakhstan. This species nests in tundra zone of Chukotka and Yakutia. Known only several records in the inside of continent: in spring migration of 1972 in Baikal lake (Durnev etc, 1996); 21-22 of September in vicinity of Sahyurte village, Maloe More (Pyzhyanov, 1989); 26 of September young male was shot in fish factory Filippovka, Kirovo-Chepetzky region, Kirovskaya oblast (Sotnikov, 2009); from 22 to 29 of September of 2011 juvenile bird was observed in taiga zone of NE Trans-Baikal area in Charskaya depression, in the edge of Chara village (Goroshko, 2014). New species of fauna of Kazakhstan. First birds were shot in Zhabagly (Southern Kazakhstan) at January 12 2014 by E.Belousov. In same place at 8-9 of February A.Isabekov, A.Kovalenko and V.Fedorenko also photographed these birds. Previously known in localities of Uzbekistan bordered to Kazakhstan territory, nests in Ugam and Pskem ridges. Japanese Waxwing was caught by Denis Astafiev at January 3rd 2013 in the apple garden in foothills of Ile Alatau. New species for Kazakhstan. The first observation in Kazakhstan. Gennady Dyakin observed one bird in the gorge Almarasan. The first record of Indian Pond Heron in Kazakhstan. Observed in Lake Sorbulak by Gennady Dyakin and Andrei Kovalenko. The northernmost nesting record in the Caspian region. Prior to this, since 2015, the Shikra has been found nesting in the Mangistau region of Aktau (see the birds.kz gallery), on April 22, 2019, one bird was photographed north of Aktau - in the city of Fort Shevchenko (A. Kydyr, birds.kz ). The first record of the Great Snipe in Kazakhstan, after more than 30 years, confirmed by photography. The last record of this species dates back to 1987, when on May 7 a migrating Great Snipe was caught in the Tentek delta (Khrokov et al. 1993).

The first nesting record in the Kostanay region. It is known that the Ural Owl breeds in the South-Western Altai and Kalba, there is also evidence of nesting in the North Kazakhstan region (Zuban, Kalashnikov 2017) and in the East Kazakhstan region in forests north of Semey (Karpov, Levin 2005). In the Kostanay region, this species was occasionally found only during wintering (A.Yu. Timoshenko, G.Yu. Timoshenko 2021, Yu. Malkov, birds.kz).
more rarities...